A story of glory, sudden death and exile 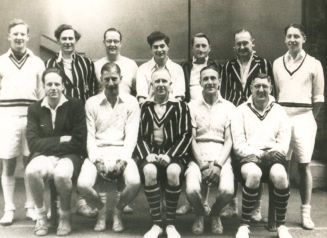 The history of the Old Cits' fives club is long and distinguished. We've been going for more than a century, we've won 13 national championships, we can boast the most successful pair ever to play the game, we've earned possibly dozens of Cambridge and Oxford half-blues and we are still thriving some 26 years after we lost our home courts in Blackfriars.
Our own competition, for the Adams Cup, is one of the oldest in the game - the silverware was donated in the 1920s and has been competed for pretty much annually ever since. Two players have actually died on court during the tournament. 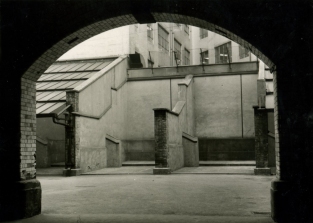 Old Citizens have been pioneers of the game at home and abroad. After the war we were the first to visit the courts at Zuoz in the Swiss Alps and Old Citizens were in the first group of players to tour the courts in Nigeria. Now, an Old Citizen has founded a company which has revolutionised court construction, making and selling the first pre-cast concrete courts ever built.
At one time the club ran a fixture list of nearly 100 matches a season at courts all over the country, including those as far away as St Bees in Cumbria, and the courts at Blackfriars were a central focus for the game in the City.
This history will be updated in the future. If you have any old photographs, please submit them to current club captain John Reynolds.

The Corporation of London built courts at the school when it moved from Milk Street to the Embankment in 1882. The Illustrated London News from December 16, 1882, records: "The open-air playground runs back as far as Tudor Street, and comprises nearly an acre of ground, which is entirely laid with tar paving. On the eastern side are the Fives Courts, two under cover, and three open; near them is a spacious gymnasium, where two trained instructors will teach the boys."
The old boys' fives club is said to have been founded in 1893. Certainly by the 1920s the club was sufficiently active for the Adams Cup to be founded - and the trophy has been competed for ever since by old boys of the school.

After a hiatus for the Second World War, security problems at the school limited access to the school's courts and games were played at St Olave's courts in Tooley Street, Tower Bridge.
'BJ' Garrett and HP 'Floater' Hawken were at the forefront of the post-war revival and Hawken was put upon by AG Coulson (general secretary of the John Carpenter Club) to be hon secretary, which he undertook reluctantly but effectively. He built up a fixture list to include weekend tours to distant schools (initially, Shrewsbury, Repton, King Edward's, Birmingham, Uppingham and Oakham) for which the club became renowned. Garrett would provide the latest Jaguar for these trips.
Others in the nucleus were LPD Lockie (who once had his sports bag carried at Eton by the future Prime Minister, Sir Alec Douglas-Home), GHC Lewis, RN Hewitt, GW Brown, GNL Harris, WH Ollis, H Sidney Smith and JA Bell.
1945 saw the arrival at CLS of TE 'Taggy' Manning, who became master-in-charge of Fives and he soon saw that the two open courts (3 and 4), sometimes used for deliveries of coal and coke, were covered and lit and that court 6 was no longer to provide storage for Arthur, the School carpenter. Manning then achieved the refurbishment of all six courts. 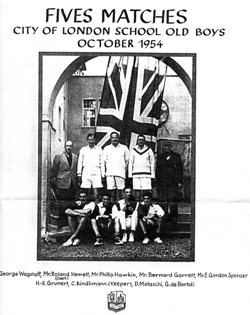 The first new blood from the School was PG Wand, who, in 1954, instigated the first post-war visit of anyone to Zuoz College, Switzerland, thus starting regular annual matches in what became legendary tours.
From time to time, there was the invitation to play on the German court at Wellenberg near Augsburg, belonging to an Old Zuozer, Prince Fugger, providing the Club with its most illustrious fixture. It was also a great honour for an Old Citizen Fives player  (GB Bates) to be chosen to act as a mentor to the prince's son on a special exchange visit.
The next newcomers were first class players, GJ Chidgey and SA Leigh, who made a huge difference to the playing strength.
In 1957, GD Stringer became assistant hon secretary to Hawken and became hon secretary the following year. With an influx of other young players, the best being AD Simpson and DM Cooper, he extended the fixture list, eventually to 93 matches in one season - including exhibition games to prep schools - a record in the history of the game and the 60s and 70s became the golden age of the Club. 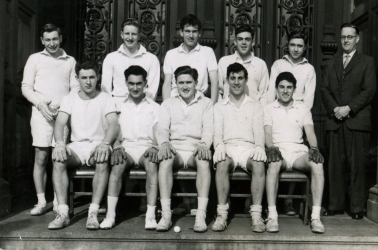 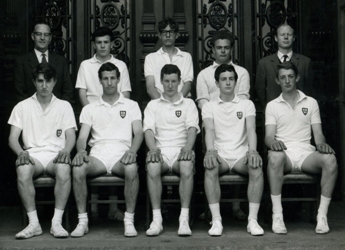 Gordon Stringer was in the EFA team to tour Nigeria in 1965, receiving a personal presentation from the Prime Minister of the Northern Region.
By discreet manoeuvres behind the scenes and the club giving guarantees to safeguard the security of the premises, it became possible to have access to the courts at most times.

For the first time, car parking was allowed in the playground - a real boon. The club was permitted to use the swimming baths changing room and have hot showers and a possible swim.
The icing on the cake, to make a pun, was being able to offer a sumptuous tea for visitors in the august surroundings of the library. Most of this was achieved through the willingness and generosity of the then Head Porter, Sidney White and his charming wife, Mary.
Six-pair matches on a Saturday at Blackfriars became the envy of other clubs.

Another triumph for the Club during these years was the annual dinner, a black tie event held at various places, but quite often at The East India and Sports Club, St James'. The attendance was in the region of 50, which included some dozen guests and to many it was the highlight of the season. The formula was simple - luxurious surroundings, excellent food and wine and no speeches. 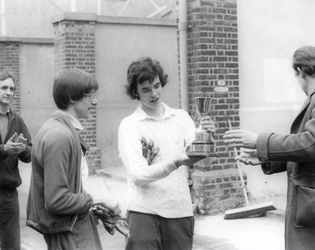 CLS has always produced keen Fives players of good average ability, which has always given the Club strength in depth, but gradually the Club was beginning to make a name for itself with the first pair. Encouragement came from CLS winning the Public Schools Championship for the first time in 1963 with CSH Hampton and PA Hall, in 1969 with AP Hawkes and LFF Boyall and in 1979 with JP Reynolds and RC Matthews.
It was in 1969 and 1970 that the club first made it at the top when CSH Hampton and SH Courtney twice won the Amateur Championship for the Kinnaird Cup. Subsequently, from 1981 to 1990, JP Reynolds and BR Matthews were champions for a record 10-year hold, as listed in the Guinness Book of Records. Reynolds went on to win the Kinnaird an eleventh time, with Harrovian Manuel de Souza in 1991.

The Adams Cup was presented to the Club in 1928 by the widow of Joseph E Adams, MS, FRCS, (who had chauffeured players to matches in a Rolls Royce) for an internal competition. The trophy has been competed for annually ever since.
Two players have died of heart attacks while actually competing in the Adams Cup - GNL Harris and GHC Lewis.
In the 1960s and 1970s, the club held magnificent Christmas teas after the Adams, which was always attended by the Headmaster, Dr Barton, the president of the JCC, the chairman of the OC sports committee, other OC admirers of the club and the master-in-charge, TE Manning. With the players, the gathering totalled some 30 to 40 people.
The Wood Plate was presented by the widow of Tom J Wood.
Competitions for the two trophies are still held each year. The Wood Plate is held as a season opener in the autumn and the Adams as a finale in the spring. They still attract as many as 20 players.

The school did not build courts when it moved site in the early 1980s, and the OCs have been exiled ever since.
The number of players coming through from the school to the old boys' club had been smaller since Taggy Manning retired as a teacher and master-in-charge in the mid-1960s. With the move to the new school, the supply abruptly stopped.
Despite this, the club is still active, playing friendly games regularly and staging the two tournaments each year - and they still attract up to 20 players, more than a quarter of a century since we lost our home courts.
The club plays most of its fives at the courts in Highgate and the new public courts at the Westway Sports Centre near Latimer Road in west London.
A new generation of players joined the club in the early years of the millennium after a fives playing master, Robin Nagy, revitalized the game at the school. He took them to Westminster to play, and insisted they also played at Highgate after school.
One of those, Nick Gill, has formed a team to join the national league structure, in division three.